On the last day of the festival, November 2, 2014, Roberto de la Torre opened the final set of performances. It is safe to assume that most who gathered that chilly late Fall afternoon didn’t know what to expect from de la Torre. Having had the opportunity to speak with him a few days before the festival began, I knew a little about what he was developing and the issue his performance would address, but I did not know how his processes would unfold. Little did I realize just how poignantly de la Torre’s actions would manifest, and how timely they would be.

Roberto de la Torre’s works take shape as negotiations of complex and ephemeral situations, associations, and actions that frequently involve large groups of people. He focuses on social issues that occur in the local context, but his performances also regularly speak to global matters. He can often find intersections that connect the two realms of concern and collapse them into one for a moment in space and time. He is from Mexico City.

For those who have remained unaware, on September 26th, 2014, 43 male college students studying to become teachers were abducted in the southern state of Guerrero, Mexico, allegedly by local police at the instruction of a corrupt local Mayor. Taken while on route to nearby Iguala to participate in a protest over the lack of funding for their school Ayotzinapa – an institution with a proud 80 year history of educating Mexico’s political left, with a student body known for their tactical activism – the students identities were shared with the media, but initially other details were scarce. As days turned to weeks inquiry into the whereabouts of the students was framed as a recovery mission hoping to save them from their uncertain circumstances. Then recently, government investigators began to open their findings up to the public. What they have shared has shaken Mexican society. Already grieving, frayed, and beleaguered by over seven years of endemic violence at the hands of organized crime, tens of thousands have taken to the streets to protest.

At present, the understanding is that the students have been murdered, disappeared after being delivered by the corrupt local police to members of a drug gang; their incinerated remains potentially located as a result of arrests and interrogation. The outrage that has swept much of Mexico has become louder as waves of protest and public grief have continued. To write anything further on the unfolding story feels a surreal overstep in this context, and instead I’ve included links to several articles covering the investigation and Mexican citizen’s response over the last week.

This tragedy has been told internationally by media as the investigation into the student’s whereabouts has continued to unfold. A situation so heart-wrenching and bewildering, far away geographically yet so close to home, despite following the story in the press, I confess I initially felt unprepared to address the complex nature of this atrocity in light of de la Torre’s performance. I’ve sat with the experience for seven days now, monitoring the media and pondering how to approach this post. For better or worse, the situation has come to a head. My suggestion here is that the feelings of anguish and dislocation that surround my personal response to this horrible story are intertwined with the artists own. I have arrived at a place where I must admit that there is nothing knowable that can be found to fully address this nonsensical and appalling act. And this is where we must begin.

de la Torre starts his performance slumped against the wall. Surrounded by the large festival crowd, he sits on the edge of an indoor plant box, and is in a state of despondency. His eyes downcast, de la Torre sighs, idly jabs his index finger into the soil, and proceeds to flick it onto the floor. As though conjured, he unearths a spoon.

Armed with this utensil, de la Torre stands. The spoon, an extension of his will to action, is plunged deep into another section of the planter’s soil. Out clatters another tool, a spatula trowel which he picks up to replace the spoon before continuing on. Before long, de la Torre’s exploration of the structures and architecture of the hall reveal a spoon, a trowel, a pair of long forks, and a rake. Pausing at each discovery as if to ponder his next step, de la Torre seems to be playing with the tangibility of his results and how they can be applied. With rake in hand, he heads outside.

de la Torre paces the sidewalk. In a growing state of distress and followed by the crowd, he moves to the lawn and begins to rake leaves aside. Intentional yet hesitant, de la Torre’s actions grow more vigorous as he scrapes and pulls the leaves away from the building. Seeing something, he drops to his knees.

With a plastic bowl now in hand, he moves on. With no apparent destination, de la Torre is not ambling but tracking. He puts his ear to the earth. He listens. This action transfers our awareness of his interests from the objects to the ways they can help him access something underground. We watch as de la Torre moves to the base of a tree and digs with the bowl. He quickly finds a silver ladle. He moves again. This time locating a metal spade, and we begin to see his progress. His tools are developing. They are better than they were before.

Digging beside the fence, he uncovers a shovel. We follow him to a large sandbox in the playground behind the festival building. Fittingly, it is a former school. For the first time we can see that de la Torre has posted the faces of the missing students in the windows of the classrooms. Dragging the shovel he drops to the ground. Lying flat, his ear pressed to the sand, he seems uncertain but he begins to dig. Gathering closely, the crowd circles de la Torre as he shovels wet sand.

He labours for a long time. His breathing grows heavy, and despite the cold, he sweats. Eventually de la Torre slows and for the first time, he speaks –“Fausto!” Calling out to his fellow artist and countryman, Fausto Méndez Luna, de la Torre beckons him to help. Together they uncover a second shovel but nothing more. Speaking quietly in Spanish, they move on. Another hole is dug. A third shovel is uncovered and de la Torre offers it to anyone willing to help. A fourth shovel brings yet another pair of arms. A fifth shovel is revealed and the numbers grow yet again. Eventually there are eight.

Together the group digs and the sand piles up. When they hit gravel at a depth of approximately three feet, de la Torre stops. Guiding this group away from the sand he lines them up shoulder to shoulder. He instructs them to bang their shovels against the concrete ground. As the rhythmic clanging rings out, de la Torre and Méndez Luna step onto the playground. In the dark earth they dig one last time.

Slowly de la Torre begins to pull items of clothing from the ground. Caked with soil, he lays them out, damp and dingy, across the play structures. Running, de la Torre holds a shirt over his head. Dropping to the ground he punches the earth. The sun is growing dim and the windows of the school glow brighter. A window on the top floor opens wide. Arms fling papers out into the sky. Scattering and floating, they fall to the ground. The clanging of the shovels heightens the intensity of this reveal, and the audience gathers to examine what has fallen across the playground. Photos of protests, huge crowds with mouths wide yelling out in dissent and despair, men and women holding vigil and embracing… these are the images of the current state of the Mexican people who have joined together to protest.

de la Torre rises to his feet, and signals. The shovels are silent, and all there is to be heard is the rustle of papers. For the disappeared…

This article originally appeared on the 2014 7a*11d Festival blog. Re-posted here with permission.

Jenn Snider is currently an MA student at OCAD University, where her research focuses on experimental art administration and exploring organizing as a performative practice. As an artist and curator, her work plays with tensions of collaborative meaning creation. She is a founding member of The Artel artist collective, and the former Director of Modern Fuel Artist-Run Centre. 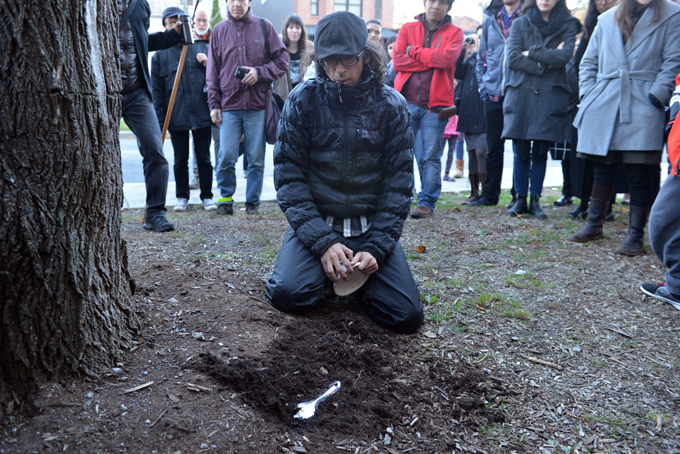 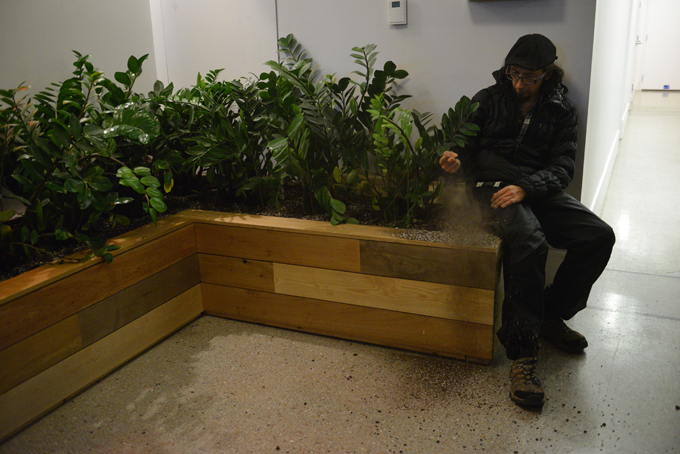 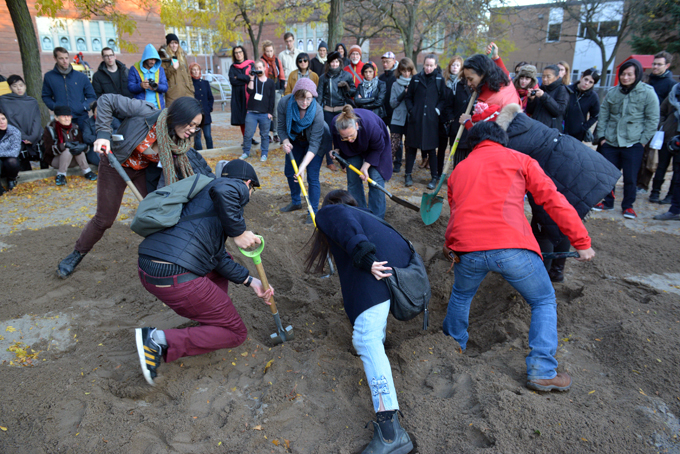