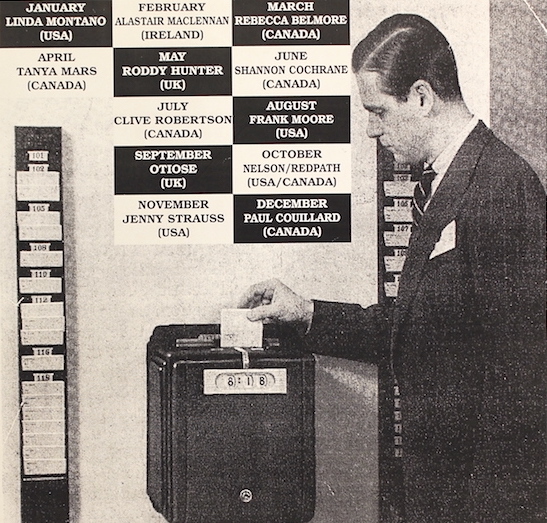 TIME TIME TIME was a 12-month series of durational performance art works by artists from the UK, US and Canada, presented in Toronto and curated by Paul Couillard. TIME TIME TIME presented works ranging from 12 hours to several days. Ritual, endurance, attention span, community-building, altering states of consciousness, boundaries between public and private, narrative, linearity and transformation were explored in the series by artists presenting their compelling, urgent visions of ourselves and our world at the end of the 20th Century.

‘Performance art’ is a difficult beast. Not many people really know the term, and even less could say what it means. For those ‘in the know’, the definitions vary widely: some definitions are very personal, while others are tied to very precise and limited historical references.

My own approach to understanding or defining the term ‘performance art’ is ‘radical’ – in the sense of looking to the ‘roots’ of the practices grouped under the term ‘performance’. Performance has four basic formal elements: time, space, the body of the performer(s), and the relationship between performer and audience. In broad terms, performance includes the various established forms of ‘theatre’ (in all its genres from recitation to puppetry to melodrama and so forth); ‘dance’ (from ballet to tap to ballroom); and ‘music’ (classical, a cappella, rap…). I use the term ‘performance art’ to name works that engage the four elements of performance, but use one or more of them in ways that are unfamiliar, unexpected, or initially unrecognizable within the cultural context that they are presented.

For the past 15 years, I have been creating and producing works that I call performance art. In calling them performance art, I am suggesting that the ‘project’ of these works, or at least of my involvement with them, has been to explore the basic elements of performance, to experiment, to research—often, to push at what appear to be the established boundaries of form. To create new forms. To look at forms outside of my personal cultural currency. To be consciously a misfit.

The premise of TIME TIME TIME is to look at the element of time or duration through performance art.

We have very odd ways of understanding time. This is apparent in how we mark time in units that can seem relatively ‘objective’ (‘days’ and ‘years’, determined by the earth’s relationship to the sun – and useful for things like planting crops or knowing when it will be dark or light) or ‘subjective’ (e.g. ‘the millennium’), depending on what we know or imagine about how these measurements came to be. Is a second meant to be a heartbeat? Why are there 60 of them in a minute? Why 24 hours in a day? Why 12 months in a year?

Here in North America at the end of the 20th Century, the measurement of time seems to press heavily upon us. Our attention spans have been perhaps sharpened but undoubtedly shortened by technologies of our own creation, while an artificial row of zeroes may be poised to wreak havoc on the electronic infrastructures of what we call ‘civilization’ and possibly on our collective psyches as well. It seems an appropriate time to look at ‘time’, to return to our ‘roots’ in time.

TIME TIME TIME is a series of 12 works by different artists, presented in Toronto over the course of a year (1999) – approximately one a month – with each work lasting a minimum of 12 continuous hours.

Twelve continuous hours is one full sweep of the face of a clock, a commonly understood time marker that surely holds many conscious and unconscious cultural connotations. Half the length of a day, twelve hours is generally long enough to encompass at least one transition of light—from ‘day’ to ‘night’ or vice versa. It is longer than the average work period, but within the realm of many types of shift work. Twelve hours is certainly a far longer time period than that normally associated with either spectatorship or entertainment, but not an unheard-of length of time for engagement in a task, or for many forms of teaching, community activity, or spiritual practice.

Twelve hours is also a long enough period to raise several practical bodily considerations for the artist in terms of going to the bathroom, drinking, eating and sleeping. Artistry is, in many ways, a response to restrictions; it is the agency that one carves out of the confrontations and resistances one encounters in the struggle to create or express. With but a single formal restriction (that the piece must be a minimum of 12 continuous hours in length), TIME TIME TIME offers the audience a chance to look at how 12 sets of artists solve these ‘practical’ problems that time brings about. How do these artists turn 12 or more hours into a performance? How do they invite an audience to engage with this work? And what clues does this provide to us about how these artists understand what performance is, what time is, and how meaning is produced through time?

This sampling of work is in no way meant to be taken as a definitive survey of the durational performance work being produced right now. Although I attempted to bring together a range of artists and approaches, the curatorial process was limited by both financial restrictions and my own ignorance. Every day I learn of other artists and works that I would have liked to have seen included here. Nevertheless, I am extremely proud of the calibre of work in this series—by artists from several cultural backgrounds, of varying ages, and at various stages of their careers. They are teaching me a great deal about the mysteries of time. It is a rare privilege to be able to observe and participate so closely in the process of these generous, creative souls—and I am forever transformed by their work. 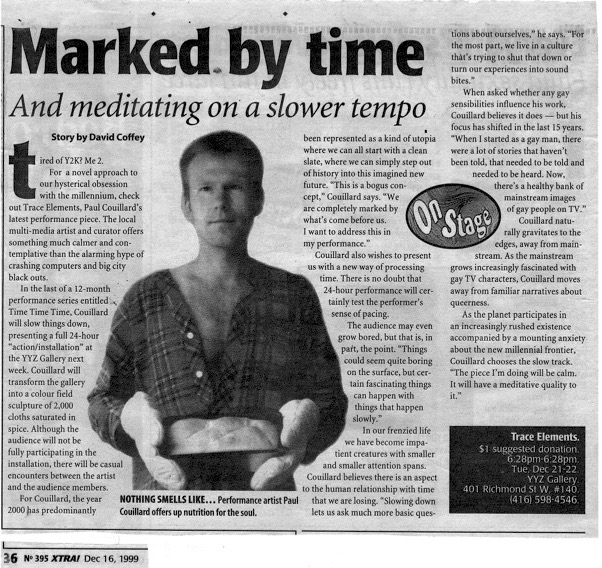 The twelfth and final performance in the TIME TIME TIME series.

The Confessional by Clive Robertson 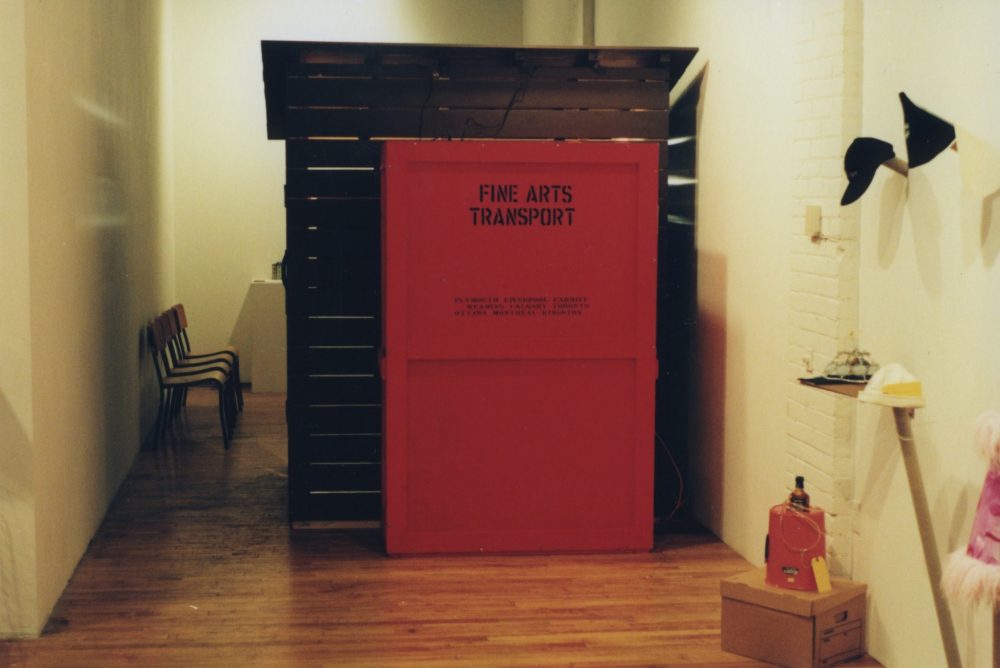 The eleventh performance in the TIME TIME TIME series. 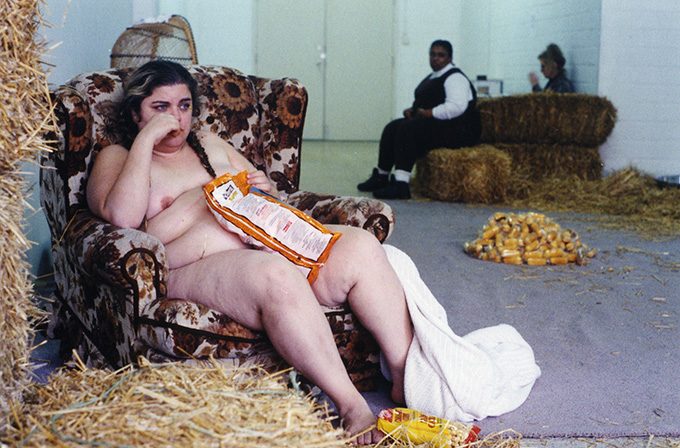 The tenth performance in the TIME TIME TIME series. 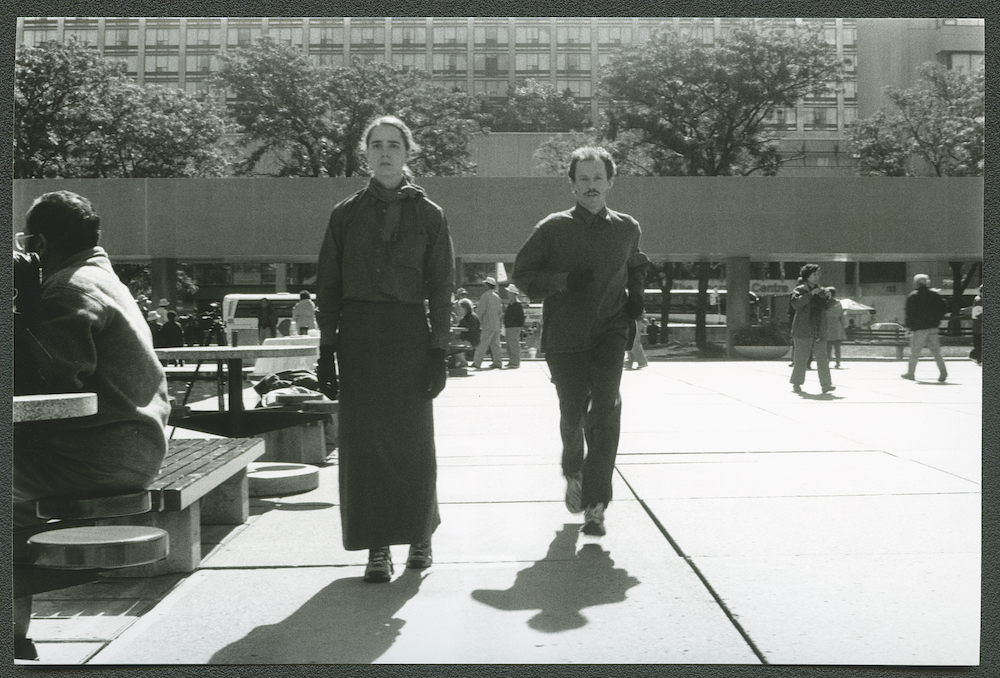 The ninth performance in the TIME TIME TIME series. 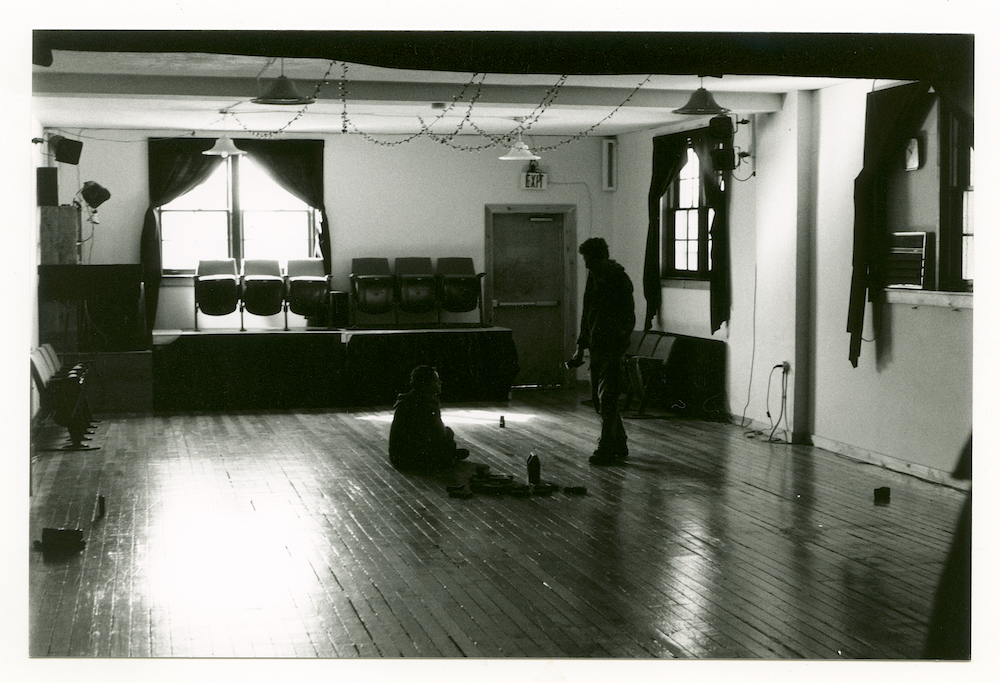 The eight performance in the TIME TIME TIME series.

Dying is Sexy by Frank Moore

The seventh performance in the TIME TIME TIME series.

Get Trained by Shannon Cochrane 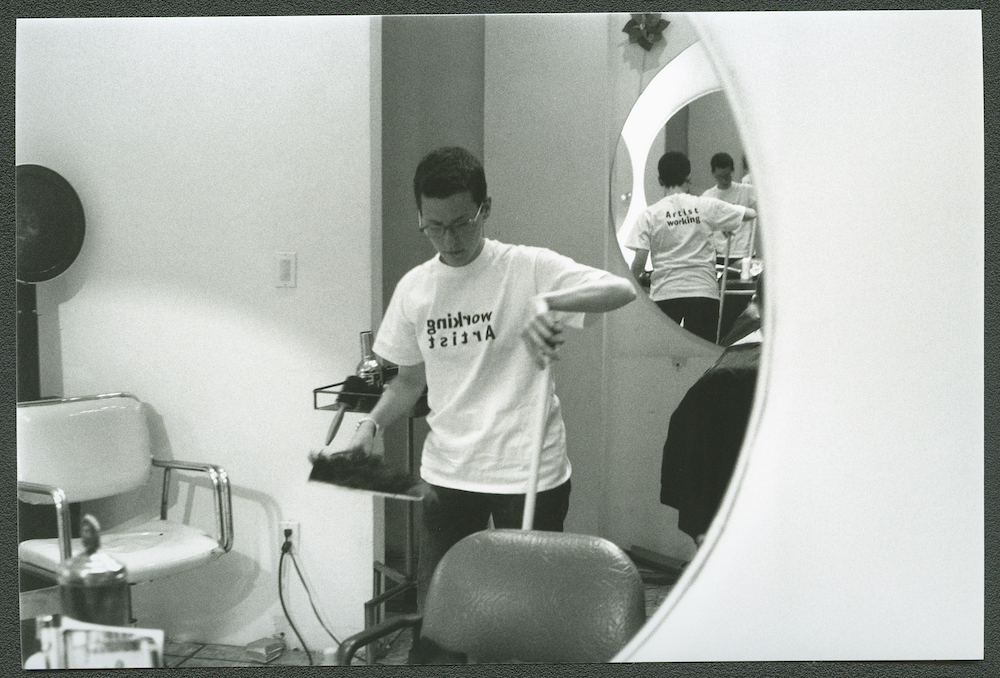 The sixth performance in the TIME TIME TIME series. 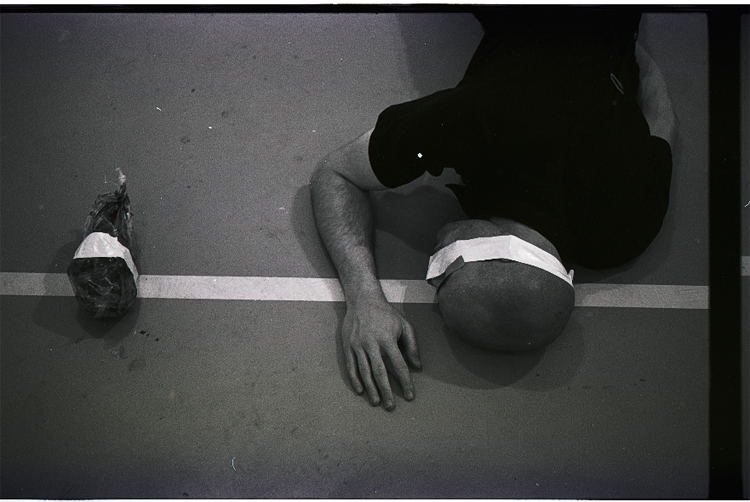 The fifth performance in the TIME TIME TIME series.

The fourth performance in the TIME TIME series. 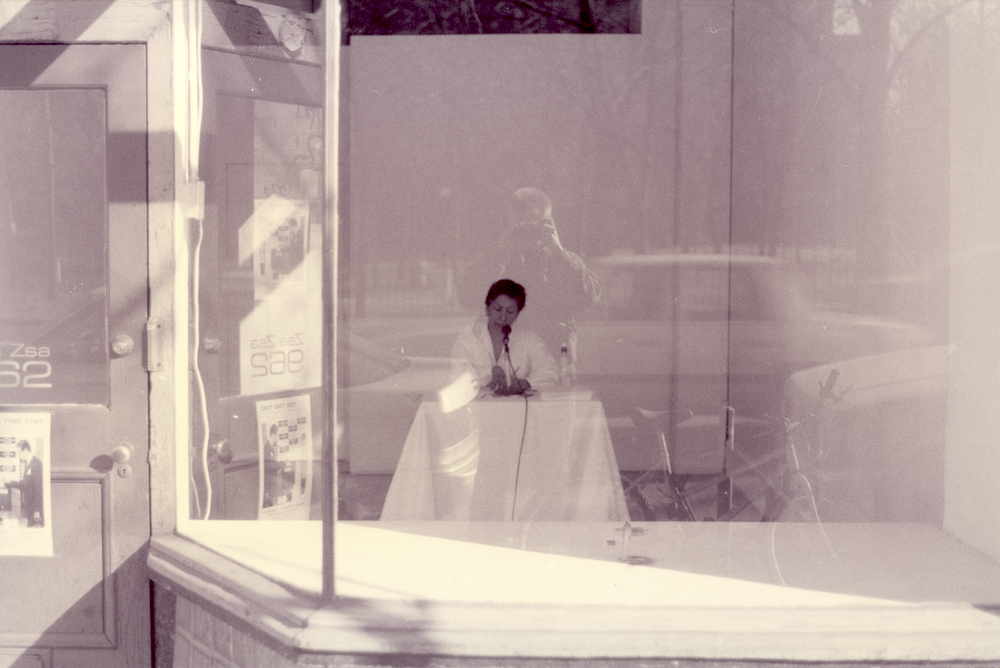 The third performance in the TIME TIME TIME series. 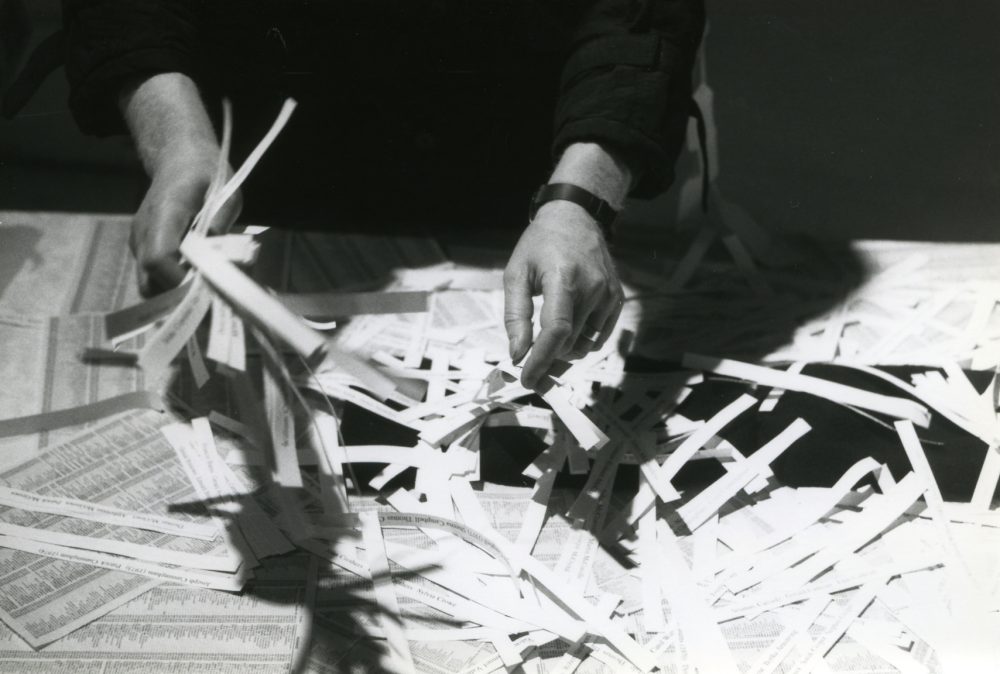 The first performance in the TIME TIME TIME series.