Tony Romano studied Intermedia Arts at the Emily Carr Institute of Art and Design and Philosophy at the University of Toronto. 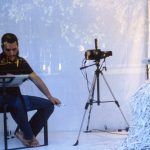 What is at rest is easy to hold;
What has not given a sign is easy to plan for;
The brittle is easily scattered;
Act on it before it comes into being;
Order it before it turns into chaos;
…Those who act on it ruin it;
Those who hold on to it lose it…
He learns not to learn and return to what the masses pass by;
He could help all things to be natural, yet he dare not do it.
~Te-Tao Ching, Chapter 64

FADO inaugurates its newest performance art series, Public Places / Private Spaces, with a 4-day window performance by artist Tony Romano. Evanescent Rumour uses personal memory as the departure point for a meditation on both the functionality and aesthetics of visual communication. The artist will sit in a storefront window for four days drawing images based on a specific memory. Audience members will be able to watch the artist drawing and view his drawings on a monitor through a live video feed, but as each image is completed, the previous one will be obscured, erased – in a word, shredded. In the end, only one image will remain. What will we glean from these images, and how will the making of them alter the artist’s own understanding of the event they attempt to portray?

Romano writes of this work:

This piece deals with the validity and quality of memory… Memory exists, but how certain can one be about its truth? How free are one’s ideas from emotions, physical environment, customs and habits? …In the process of receiving, storing, recalling and communicating, the idea becomes over simulated, fragmented and distorted. This evanescent cycle leads to false analogies, which become one’s reality.The wall between the subjective and objective (private & public) is created by mediation. My work serves as a tool to investigate reality and its make up. I wish to erase the walls between “art” and “reality”, bringing to light illusion, which is the grand mysterious reality of life. We live in a world surrounded by a trompe-l’oeil. In the spirit of the iconoclasts, I wish to break down all analogies that have served as the foundations of Western Culture. We have lost mystery and have constructed reality.