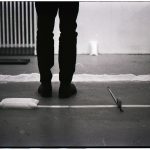 Roddy Hunter is an artist, educator and writer based in York, England since 2007 where he is Head of Fine Arts at York St John University. He studied at the University of Glasgow before living and working in Kingston-upon-Hull as a member of Hull Time Based Arts between 1994-98 and in Totnes as Lecturer in Visual Performance and then later Director of Art at Dartington College of Arts between 1998-2007. He gained an MA (Contemporary Arts) from Nottingham Trent University in 1998. He is interested in aesthetics, pedagogy and the art of action, mainly in relation to social and urban realities.

Curatorial work includes: Art. What is it good for? (with Tracey Warr, Dartington, 2004), Span2 (with André Stitt, London, 2001) and Rootless ’97: The Nomad Domain (with Hull Time Based Arts, 1997). Critical writings include monograph essays on Alastair MacLennan, John Newling, and André Stitt. Numerous public lectures, talks and workshops have been given internationally. He is also presently Chair of the Turning Point Yorkshire and the Humber Interim Steering Group.

Through his work, Hunter investigates and creates charged, complex environments. Using simple materials, he moves through and acts upon a space, mapping out territories and time periods, tracing and erasing interrelationships among himself, his audience, and whatever objects are present. For this performance, his primary materials will be an empty white room, two video monitors with live feeds, a large sack of flour and a roll of white gaffer tape.

Statement about Statement of Matter by Roddy Hunter:

This performance is one of an ongoing series of inherently interdisciplinary negotiations of anterior spaces, places and actions. This anteriority does not imply, however, that these exist in the past, that they are lost to us. Rather, these states of matter and being remain ‘before’ conceptions and perceptions of causal thinking and doing in linear time frames. As such we are in their midst and by uncovering them we realise participation in a new milieu where previously rigid forms are no longer assured.

In our climate of syntactical formalism, I propose that the actuation of installation, through its precise location of action as the site of both the perception and conception of the aesthetic matrix, provides a necessary undoing of any preexisting equation whereby language solely equals thought.
~Roddy Hunter, Some notes and sources toward a realisation of installation, 1999

Statement of Matter: Performance(s) of Indefinite Duration is one of a series of projects bearing the same title. In a manifesto for these works, Hunter writes: “Art has, for too long, operated as a formal ‘response’ to the world… The realisation of Performance Art… is… a realisation of the difference between uncovering and understanding (or translating)… [T]here is no thing to understand, or put an other way, it becomes impossible not to understand everything. When art is lived, so living is art; and when living is art, so art is lived.

Presented by FADO in cooperation with Le Lieu in Québec City, as a satellite event of Le Lieu’s Rencontre internionale d’art performance et multimédia. This event was organized and curated by Sandy McFadden with the support of Istvan Kantor and Paul Couillard.