My name is Francesco Gagliardi and on behalf of FADO I am delighted to welcome you to the opening of GOOD BUY! by Tanya Mars.

Saying that the person you’re about to introduce needs no introduction is usually a cliché, but on this occasion it’s just a statement of fact. If you’re here tonight you know Tanya, and if you know her you love her – or at least you want some of her stuff.

So instead of talking about Tanya I will talk about myself, and I will tell you about the first time I sat eyes on Tanya Mars. It was about ten years ago – at the Lower Ossington Theatre: just a few doors north of her old apartment, which many of you will remember. Seiji Shimoda was performing his then already famous table piece, in which he cavorted on and around a table for about an hour wearing no clothes. The piece was originally performed using a custom-built table, but by the time I saw it, it involved the use of what Seiji referred to as “indigenous” tables: tables found on site and somehow connected to the ecosystem of specific performance communities. At the end of the evening, Shannon Cochrane – then, as tonight, the wizard behind the curtain – thanked Ms. Mars for lending the table. She waved off the acknowledgement rather brusquely, shaking her head in a way that was soon to become familiar to me: a sort of modified hair flip, the last phase of an elaborate sequence of actions starting with her glasses repeatedly traveling up and down between the bridge of her nose and the crown of her head, and invariably getting entangled in her platinum blond hair. It was 2008 and she had just been awarded the Governor General’s Award in Visual Arts. I found her rather formidable.

In retrospect, it makes perfect sense that it was Tanya who lent the table, and not just because she lived next door: she sat (at her table) at the very centre of the city’s performance ecosystem. As I came to learn, if you needed something, chances were that Tanya had it. And, if she had it, she would lend it to you no question asked. A rotary telephone or a rotating tray, a yard of pink fabric or a pair of riding spurs, faux fur, real fur, fake eyelashes, thigh-high fishing boots or tap shoes, a thurible, a button in the shape of a gondola or a gondola made of buttons, two identical cocktail hats or five boxes of plastic bobblehead dogs.

Over the years, this extraordinary collection has grown while traveling from Montreal to Toronto to Shelburne Nova Scotia, and back to Toronto – aboard moving vans and cars, up and down elevators and flights of stairs, in and out of storages rooms, attics, and unfinished basements – in labelled and unlabelled boxes and plastic bags, or rattling inside containers that were themselves part of the collection: hatboxes, slide projector cases, 1950s Bakelite handbags hand-made by nuns behind the Iron Curtain. Over the years, out of this accumulation, Ms. Mars has built her performance worlds: the costumes, the sets, the props – her tools and weapons. You might recognize a clear-plastic umbrella from The Pursuit of Happiness, a toy baby grand piano from Tyranny of Bliss, silver shoes that have glimmered in several pieces since the 1960s.

But building worlds requires discipline and discrimination. Four buttons may not be enough, but six is one too many. The shape of the vase may be right, but if the weight is not, you can’t use it. Mixed in with the performance relics, still radiating the afterglow of their brief tenure as art objects, a lot of what fills the room next door is just stuff that has never been used. Not exactly refuse, but material waiting to be called to life – a sort of counter-image of Tanya’s world: the feathers that didn’t make it onto the hat, the five gorilla dolls discarded at the last moment, the gloves that would have been perfect if only they had been a brighter yellow. This shadowy double (the dark side of Mars, if you will) is not only revealing of an artist’s discernment and taste, but full of potential waiting to be activated. It was chosen and collected with care, it almost came to life and didn’t – but it still could. It lies dormant, waiting to be awakened from the uncertain repose of objecthood.

For 3-days only! Not to be missed! Rare opportunity! Something for everyone! Be the first to own an original Mars! Everything must go!

Q: What do performance artists do when faced with rising rents, rarefied availability, aging and too much stuff?
A: Go out of business! (or)
B: Downsize. Re-purpose. Re-gift. (or)
C: Move to Hamilton.

For 3 days only, you will have the unique opportunity to see, touch, smell (and buy!) decades of treasures collected in the name of art. One-part exhibition of performance materials and one-part studio sale. Come and browse the materials, objects, costume bits and other curiosities from Tanya Mars’ personal studio/storage locker. Everything is up for grabs at Toronto’s hottest performance art POP-UP shop, GOOD BUY!

Tanya Mars is a feminist performance artist who has been involved in the Canadian art scene since 1973, and has been collecting valuable stuff all that time, lugging it from Montreal to Toronto to Shelburne, Nova Scotia and back again to Toronto. Disguised as “art materials” some of these things have been used in performances over the years, other things are performances-in-waiting.

She’s done a lot of things. Among them: Performances (solo and collaborative) in Canada, the Arctic, Europe, South America, China, Mexico and US; director/member of Powerhouse/La Centrale; Editor of Parallelogramme/ANNPAC (if anybody remembers what those things are); some videos; collective member of 7a*11d International Festival of Performance Art; two books on Canadian Women Performance Artists with Johanna Householder; teaching performance at NSCAD and UTSC; parent, grandparent, Art Mom to many. 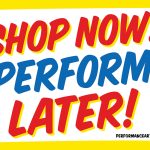