Born in Calgary, Alberta, Canada and raised on the Great Plains of North America, Terrance Houle is an internationally recognized interdisciplinary media artist and a proud member of the Kainai Nation (Blood Tribe).

Involved with Aboriginal communities all his life, he has traveled to reservations throughout North America participating in Powwow dancing and native ceremonies. Houle makes use of performance, photography, video & film, music and painting in his work. Likewise, Houle’s practice includes various tools of mass dissemination such as billboards and vinyl bus signage.

Houle graduated from the Alberta College of Art and Design in 2003 with a BFA Major in Fibre. His groundbreaking art quickly garnered him significant accolades and opportunities. In 2003, Houle received an invitation to participate in the Thematic Residency at the Banff Centre for the Arts. This residency’s focus was on 34 international Indigenous people, exploring issues of colonization and communion. In 2004, his work in short video & film presented was awarded Winner of Best Experimental Film at the Toronto ImagineNATIVE Film Festival. In 2006, Houle received the Enbridge Emerging Artist Award, presented at the mayor’s luncheon for the arts. Houle’s work has been exhibited across Canada, the United States, Australia, the UK and Europe.

Terrance Houle’s first major solo exhibition, GIVN’R, opened at PLUG-IN Institute for Contemporary Art in Winnipeg, Manitoba. GIVN’R is a small retro-exhibition of Terrance’s works in film, video, performance, installation, mixed media, and photography between the years of 2003 to 2009. ​Houle lives and maintains his art practice in Calgary. 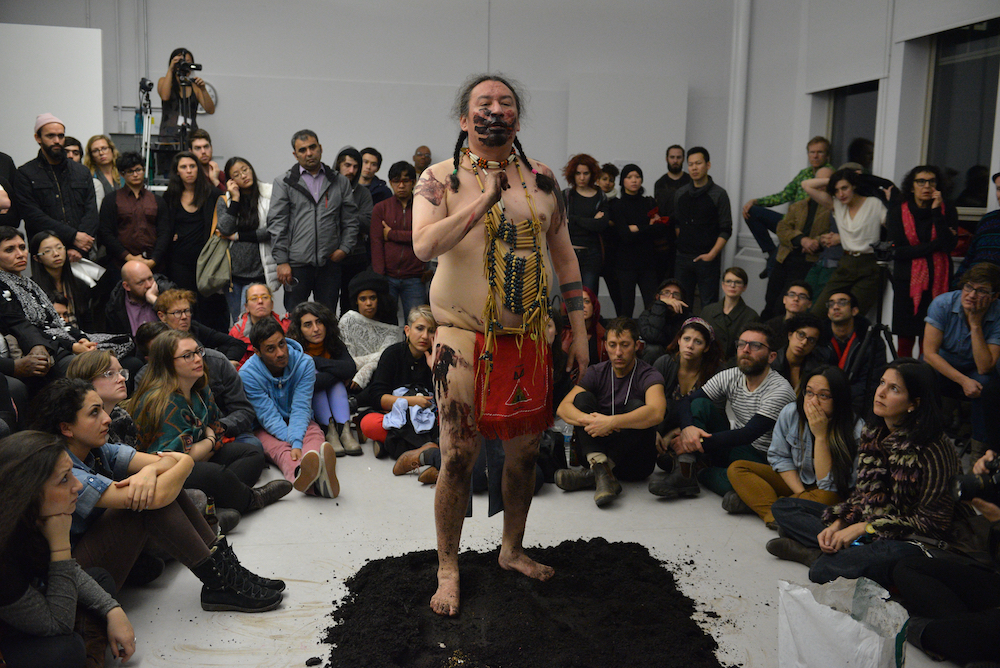 Evoking our colonial and non-colonial histories that exist in the light of night as in the darkness of the day, this performance awakens a collaboration with artists, audience, and spirit.