Fiona Griffiths is a teacher, coach, mover, actor, choreographer/creator, nurse and body worker. Fiona studied many movement and acting techniques from Feldenkrais, Alexander, and Kinetic Awareness to clown, bouffon, Theatre of the Oppressed, and Suzuki and Grotowski work. She has performed extensively in dance, theatre, clown and video. Fiona studied and taught with Richard Pochinko and Linda Putnam for many years. She was founder and director of Atelier Pochinko at the Theatre Resource Centre for ten years and became the Artistic Director from 1990–1992. She teaches and coaches actors, dancers and clowns in movement, acting and source work. Fiona has taught in the graduate theatre programs of York and Yale Universities and choreographed and coached for many professional theatre and dance companies. In 2007–2008, during a sabbatical year at the Central School of Speech and Drama in London, England, she completed an MA in training and coaching actors. As well as running independent workshops and coaching performers, Fiona also teaches at the School of Toronto Dance Theatre, Hart House, Equity Showcase and the Clown Farm.

Five Holes: Touched is the second in a series of performances dealing with the five senses. Touch is arguably the most intimate and revealing of the senses, that, above all others, can moves us to ecstasy or shatter us.

Five Holes: I’ll be seeing you 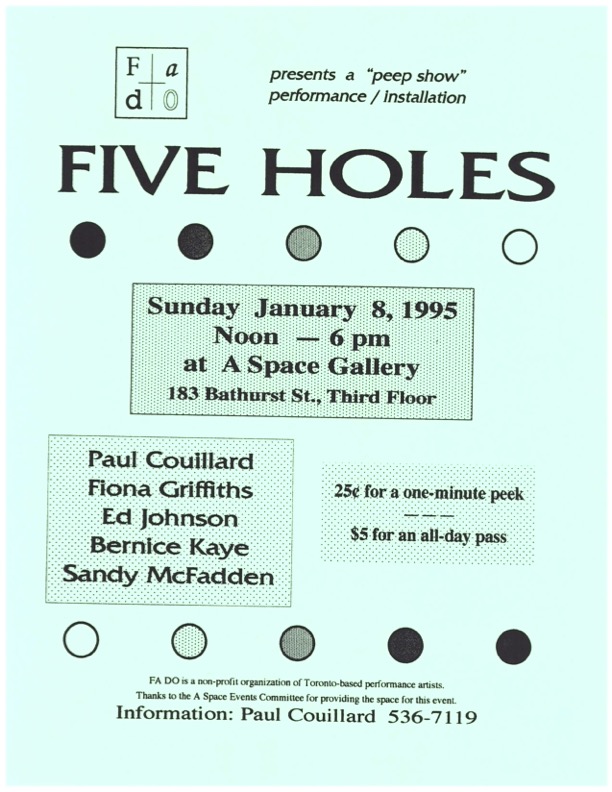 Shake off the New Year’s blahs by taking in a performance art peep show!