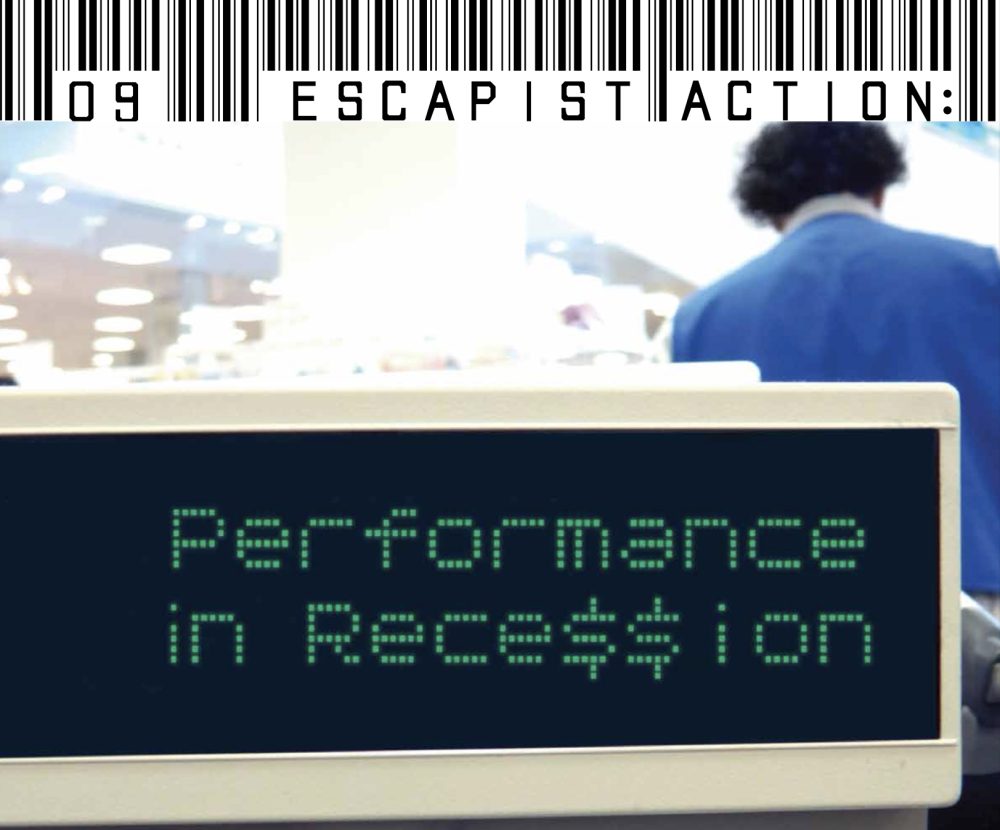 Daily media reports bombard us with the reality of the current worldwide economic situation. We are in the midst of a recession. Businesses are failing and offering discount prices on everything in the store, the stock market is volatile, companies are looking for bailouts, and government agencies are giving away bloated stimulation packages.

Escapism is an immersive art. It satisfies a desire for sensual pleasure. It envelops the viewer in a hermetic and narcissistic space where reality is suspended. Stimulated by an individual’s need for escape the realm of the imaginary is opened and new possibilities arise. Non-places that do not exist make themselves possible, submerging the individual and leaving them in a state of confusion. Spectators who participate or view an escapist action become disconnected from their everyday surroundings and transport themselves to a place of contemplation or simply blank out.

Escapist Action: Performance in Recession begins with a weeklong series of performance events that investigate economics and presents the audiences with alternative methods of exchange. The series culminates in three evening programs of performance entitled Black Friday, Red Flag Saturday, and Grey Cup Sunday. These three evening investigate the mixed emotions evoked by the volatile economic market. The performances navigate the sensations of fear, despair, laughter, and hope. The audience is transported from the dark emotions of Black Friday through the humour of Red Flag Saturday arriving at the celebratory Grey Cup Sunday.

Julian Higuerey Núñez and Ignacio Pérez Pérez activate Escapist Action by creating an alternative barter system in which performances and time can be exchanged between the artists and audience. The exchange starts with an Open Barter Market on Monday, November 23, followed by a 72-hour performance (6 days / 12 hours each day). Tomas Jonsson’s work creates a redundant economy across the street from a storefront display he mimics. In the piece Magpie, Jonsson observes the shopkeepers display, purchases items from the shop, and then sets up shop across the street. Jonsson consciously contradicts traditional exchange structures by giving away items, available for purchase at the neighbouring store, to passersby who engage the artist in conversation. Joanne Bristol presents an intimate service based performance dealing with internalized space as a form of escapism in her performance entitled Association for Imaginary Architecture.

The first evening program takes place on Black Friday. Renowned as the biggest shopping day in the US, and an indicator for financial forecast for the upcoming holiday season, Black Friday also refers to the financial crisis of 1869. On Black Friday, Julian Higuerey Núñez and Ignacio Pérez Pérez start the evening with the last performance of their twelve-hour day. claude wittmann explores the fears we experience in times of economic uncertainty and the mob like tendency to blame it on the “other”. In this case Wittmann looks at the instances in history where woman have been labeled as witches and damned for financial hardship within communities. Rodolphe-Yves Lapointe addresses risk taking and responsibility in a final desperate act of escapism.

Black Friday is followed by Red Flag Saturday. The Red Flag signifies warning, defiance, left-wing politics and amazing sales at department stores. This evening’s tone is decidedly lighter than Black Friday, compelling the audience to escape from their recessionary blues and find some relief in humour. This evening begins, like Black Friday, with a portion of The Artist and the Beanstalk by Julian Higuerey Núñez and Ignacio Pérez Pérez. Then John G. Boehme explores adolescent escapism and Joanne Bristol encourages Torontonians to relocate to the “wallet friendly” city of Winnipeg.

BLACK FRIDAY
My First Witch Piece by claude wittmann
Nut your way out! by Rodolphe-Yves Lapointe

With this duo of interrelated performances, Núñez & Pérez create an alternative exchange and cultural economy, one based not on capitalist value, but on need value.